The Catch 22 of Technology in Higher Education

This article originally appeared in the EDUCUASE Industry Insights Column. It just so happens that 2018, the year of EDUCAUSE’s 20th anniversary, is also ProctorU’s 10th anniversary. Like EDUCAUSE, we have been commemorating the history of online education, especially the technologies that made online education possible and resulted in the need for online proctoring.

Imagine a typical college student’s access to technology 40 years ago. In 1978, classes were largely conducted in person, assignments were handwritten or typed on a typewriter, research was done in a library, and books were only available in print. Fast-forward 20 years to 1998, when distance education was really beginning to spread its wings. Many students used their own personal computers for homework, research was still conducted in the library, books were still largely distributed via print editions, and students could only access the Internet using a dial-up modem connection. 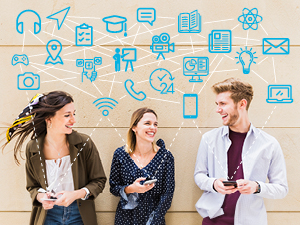 Today, a typical student’s entire life and identity are tied to technology. Students can choose to attend college online, on campus (or a combination of the two), they can complete their assignments on any number of devices, and most courses include only digital publications of textbooks. There’s no doubt that access to technology has changed the way students navigate their academic experience.

Technology has not only impacted a student’s college experience—it has changed the industry of higher education as a whole. Educators have adapted their methods of teaching and student-based learning. Colleges have adapted their pedagogy and delivery of programs to fit an online learning model. Innovations in technology not only have increased access to education but also have allowed a more personalized approach to both teaching and learning. From massive open online courses (MOOCS) to flipped classrooms, to partnerships between companies and universities to create new and innovative degree programs, technology is helping to enhance access, improve the student experience and, in some cases, lower the costs of education.

With all the technological benefits and advances in education, there is still one glaring area that remains a double-edged sword: academic dishonesty. For as long as teachers have been instructing students, there has been a segment of students who try to game the system and cheat on assessments. The idea of academic dishonesty is nothing new. But the methods used to cheat have evolved as fast as the rate of innovation in the past decade. Some common cheating methods are nothing new, but technology has opened a world of new options. As an online proctoring company, ProctorU has seen it all.

Some methods use no technology:

Some methods use a low level of technology:

And then there are high-tech methods:

More than just broadening the available forms of cheating, technology has also allowed cheaters to disseminate their methods to the masses via social media, blogs, and websites. The very innovations that have expanded access to education have also created an entire cottage industry of cheaters selling exam content and serving as proxy test-takers.

With new technology and the wealth of information available to teach students how to scam the system, it is more tempting than ever for a student to cheat. Does that mean more students actually are cheating? Not necessarily.

One of the first large-scale studies of academic dishonesty in the United States was conducted in 1964 by Bill Bowers.1 In his study of 1,000 students at 99 institutions across the US, 75% of all respondents self-reported that they had engaged in one or more acts of academic dishonesty. In 1996, researchers Donald McCabe and Linda Trevino2 replicated the study in nine of the same schools and found that the percentage of respondents who reported serious acts of academic dishonesty increased from 75% to 82%. Additional research conducted over the past decade by Dr. McCabe and the International Center for Academic Integrity showed that 68% of undergraduates surveyed admitted to cheating.

What these statistics from more than 50 years of empirical research demonstrate is that the rate of self-reported cheating among college students has stayed relatively steady—between 70–80%—if not slightly decreasing over the past decade. Even our own analytics at ProctorU show that unpermitted resources have been removed prior to 79% of assessments so far in 2018, showing at least the potential to cheat in three-fourths of test-takers.

Thus, we see that technology has been both a blessing and curse to educators. With increased innovation has come increased access to education through online methodologies, but technological advances have also brought new and varied ways for students to devalue that education by cheating. To combat new methods of academic dishonesty occurring online, a new industry—online proctoring—emerged 10 years ago to protect the integrity of online programs.

Ever since the advent of distance education, those who dedicate themselves to preventing or catching academic dishonesty have been playing a game of cat and mouse with cheaters. With each new innovation, tech-savvy students find new ways to use it to game the system. And with each new method of cheating discovered, online proctoring providers such as ProctorU build additional ways to catch these attempts. The latest advances in online proctoring models bring artificial intelligence and supervised machine learning into the mix to heighten security, flag suspicious behaviors a proctor might miss, and identify more dishonest behaviors than ever before.

In our own experience, we’re preventing and catching more cheating by integrating artificial intelligence behind all proctoring sessions—even our live proctoring services, where a live proctor monitors each exam session, are now backed by AI. This technology is learning based on our human direction and oversight. It’s getting smarter with every exam proctored. It’s catching things the human eye and ear alone couldn’t detect in real-time. For those of us who like to nerd out on technology, it’s exciting to see how it can be applied in new ways to help improve outcomes.

When Gordon Moore, co-founder of Intel, made his famous prediction that became known as Moore’s law back in 1965, he knew the rate of innovation in technology would be exponential over the coming decades. But he couldn’t predict how that technology would manifest. He couldn’t predict that we would all be carrying supercomputers in our pockets 40 years later. And even today, it’s difficult to predict what the next big thing in higher education technology will be—or what the next big method of cheating will be. But we do know that technology will continue to help us get smarter in our methods to catch cheaters. We can say with certainty that when each new innovation comes to market, students will try to use it to their advantage, and we’ll be there to stop them.

If you’d like more information about ProctorU and how we’re using technology to uphold the academic integrity of online programs, please contact us at your convenience. Citations: